Featured
Srebrenica survivor: I'd spit on Butcher of Bosnia 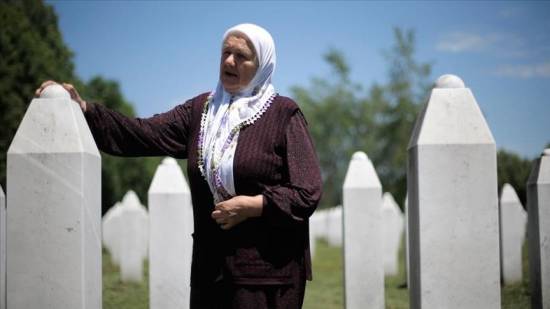 "I would spit in the faces of those responsible for the Srebrenica genocide," says Bosnian War survivor Mejra Djogaz.

Djogaz, who lost her husband and three sons in the war which led up to the genocide, is waiting for the final decision on Serb commander Ratko Mladic, also known as "The Butcher of Bosnia."

The final verdict against Mladic is scheduled for June 8 by the International Criminal Tribunal in The Hague.

The 78-year-old former general was sentenced by the UN court to life imprisonment in 2017 for genocide in Srebrenica and crimes against humanity between 1992 and 1995.

Mladic was once Europe's most wanted man after his role in the Bosnian War from 1992-95.

Djogaz recalled her traumatic memories from the Bosnian War saying that she buried her husband and eldest son Zuhdija within a week in October 1992.

"I saw my husband at the old battery factory the last time. He had said we would all get out safely. He was right next to me. I wasn't afraid at all. Since my children are gone, since they're dead, I'll die too. Now, if they bring 10 people who did those evil deeds in front of me, I would spit in their faces, but I would not get my hands dirty."

"We didn't have a place to stay. We started staying in a makeshift house that we built on our own land when a strike destroyed the house we had temporarily taken shelter in," said Djogaz.

Djogaz said that Dutch soldiers placed her daughter and herself in the former battery factory used as a base for United Nations in Potocari in 1995.

"My two sons were alive at that time. We said goodbye to my sons by the river, we never saw each other again. My middle son Munib was 21, and the youngest Omer was 19 years old when they were killed," said Djogaz.

She said that they did not find out what happened to her sons until 2009.

"They said that they found the body of my son Omer in 2009. Munib's body was also found within a month. I went to Tuzla and gave the necessary approval for his burial. Munib's body was found in two mass graves, some of his bones were missing. I still wanted them to be buried. I wanted to at least have a grave to pray at," said Djogaz.

Djogaz returned to her village from the U.S in 2002 where she used to live with her family before the bloody war in Bosnia.

She now finds solace by offering prayers at the graves of Omer and Munib.

More than 8,300 Bosnian Muslim men and boys were killed after Bosnian Serb forces attacked the UN "safe area" of Srebrenica in July 1995, despite the presence of Dutch troops tasked with acting as international peacekeepers.

Srebrenica was besieged by Serb forces who were trying to wrest territory from Bosnian Muslims and Croats to form a state.

The UN Security Council declared Srebrenica a "safe area" in the spring of 1993. However, Serb troops led by Gen. Ratko Mladic, who was later found guilty of war crimes, crimes against humanity and genocide, overran the UN zone.

About 15,000 Srebrenicans fled to the surrounding mountains, but Serb troops hunted down and killed 6,000 in the forests./aa