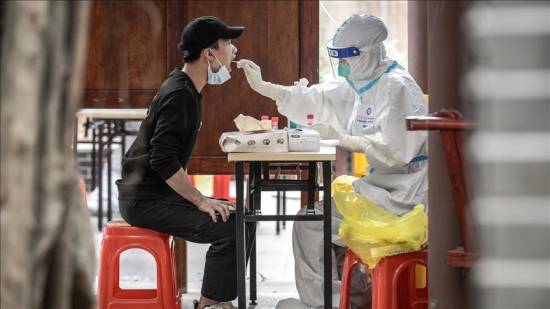 China's strict COVID-19 measures to curb omicron-driven outbreaks, particularly in the financial hub Shanghai, have taken a toll on the world’s second-largest economy.

In the last six months in China, mass tests, curfews, travel restrictions and quarantine measures have hit economic activities as well as social life due to epidemics in metropolitan cities such as Shanghai, Beijing and Xinjin, where the population is dense.

It remains unclear how China will adapt its combat strategy over time, while other countries have largely normalized.

Economic performance, measured in many fields, fell to its lowest levels since the first months of the pandemic, when the first cases were seen in Wuhan, China.

Due to the restrictions, industrial production and retail sales in the country recorded their sharpest declines since the beginning of the pandemic.

According to the data of the National Bureau of Statistics (UIB), the industrial production, which calculates the value-added output of industrial enterprises with an annual turnover of more than 20 million yuan (about $2.94 million), dropped by 2.9% year-on-year in April.

This was the sharpest drop since February 2020, when the effects on production were first felt at the beginning of the pandemic.

The industrial production increased by 5% in March.

The Manufacturing Industry Purchasing Managers Index (PMI), which measures the economic activity in the manufacturing sector in China, decreased by 2.1 points to 47.4 in April -- the lowest level recorded since February 2020.

Values ​​above 50 in the PMI index indicate a rise in economic activities, while values ​​below indicate a drop. The rise in consumer prices was affected by the disruptions caused by their restrictions in supply chains.

The unemployment rate in Chinese cities increased by 0.3% in April compared to the previous month and reached 6.1%.

According to UIB data, 4.06 million jobs were created in the first four months of the year, while the unemployment rate in the country's 31 largest cities rose to 6.7%.

China aims to create more than 11 million new jobs in cities this year, keeping the unemployment rate below its target annual growth rate of around 5.5%.

Restrictive measures implemented in many cities, especially in Shanghai which has a population of over 26 million, also negatively affected the consumption.

The retail sales decreased by 11.1% in April compared to the same period last year.

The decrease was the sharpest one recorded after the 15.8% drop in March 2020, when the first effects of the COVID-19 pandemic were felt.

The auto sales in China fell to 1.18 million units in April, down 47.6% compared to last year, according to data from the China Automobile Manufacturers Association.

The volume of sales decreased by 12% in the first four months of this year compared to the same period last year.

The number of cars put on the market has also decreased due to the cessation of production in the factories and the problems experienced in the supply of parts.

According to data from the China Automobile Dealers Association, the number of cars produced decreased by 41.1% in April compared to last year.

The fixed capital investments, including investments in infrastructure, real estate, machinery and equipment, increased by 6.8% in the first four months. The increase remained below the 9.3% increase in the first quarter.

On the other hand, investments in the real estate sector decreased by 2.7% in the first four months of the year compared to the same period last year. This is the first annual reduction since the outbreak emerged in Wuhan.

Real estate investments decreased by 3.3% in the first four months of last year./aa