Featured
'We are not natural-born enemies of Iran,' Saudi U.N. envoy says

UNITED NATIONS/DUBAI (Reuters) - Saudi Arabia said on Monday it would restore ties with Iran when Tehran stopped meddling in the affairs of other countries and pledged that Riyadh would continue to work "very hard" to support bids for peace in Syria and Yemen despite the spat.

Saudi Arabia cut all ties with Iran on Sunday following the kingdom's execution of prominent Shi'ite cleric Nimr al-Nimr. Protesters in Iran and Iraq marched for a third day to denounce the execution.

When asked what it would take for ties to be restored, Saudi U.N. Ambassador Abdallah Al-Mouallimi told reporters: "Very simple - Iran to cease and desist from interfering in the internal affairs of other countries, including our own."

He added, "If they do so, we will of course have normal relations with Iran. We are not natural-born enemies of Iran."

Jubeir blamed Iran's "aggressive policies" for the diplomatic action, alluding to years of tension that spilled over on Saturday night when Iranian protesters stormed the kingdom's embassy in Tehran.

The United Arab Emirates (UAE), home to hundreds of thousands of Iranians, partially downgraded its relations but the other Gulf Arab countries - Kuwait, Qatar and Oman - stayed above the fray.

Shi'ite Iran accused Saudi Arabia of using the attack on the embassy as an "excuse" to sever ties and further increase sectarian tensions.

A man was shot dead in Saudi Arabia's Eastern Province late on Sunday, and two Sunni mosques in Iraq's Shi'ite-majority Hilla province were bombed in the fallout from the dispute between the Middle East's top Sunni and Shi'ite powers.

But analysts said fears of a sectarian rupture across the Middle East were premature, and the break in Saudi-Iran relations could be more a symptom of existing strains than evidence of new ones.

"The downgrading of ties is not fundamentally a question of responding to executions and the storming of an embassy... (but rather) a function of a much deeper conflict between the two states," said Julien Barnes-Dacey, senior policy fellow at the European Council on Foreign Relations.

Crude importer China declared itself "highly concerned" with the developments, in a rare foray into Middle East diplomacy. The United States and Germany called for restraint.

Russia offered to mediate an end to the dispute but a U.S. senior State Department official said Iran and Saudi Arabia must work out their differences themselves.

"It is not going to be helpful for us to own this process, certainly to be seen to be driving it," the U.S. official said. "They have to work this out between themselves if a solution to this tension is going to be long-lasting and sustainable." 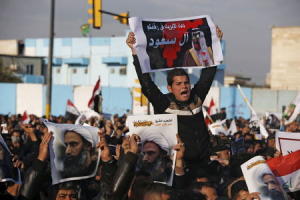 Brent jumped 4 percent early on worries about the tensions. But the crude oil benchmark erased its gains and settled a few cents lower as fears rose about the global economy and the Middle East dispute looked unlikely to disrupt oil supplies immediately.

Stock markets across the Gulf dropped sharply, led by Qatar which fell more than 2.5 percent, with geopolitical jitters outweighing any benefit from stronger oil. 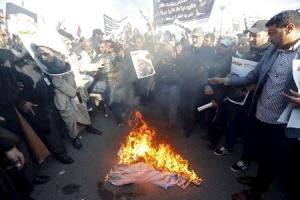 Saudi Arabia has been instrumental in bringing together Syria's political and armed opposition groups that would participate in peace talks with Assad's government.

State Department spokesman John Kirby told reporters that Washington expected meetings between the warring parties in Syria to take place as scheduled this month. The United Nations aims to hold talks on Jan. 25 in Geneva.

Saudi U.N. Ambassador Mouallimi said his country's severing of ties with Iran would not affect its efforts to secure peace in Syria and Yemen. "We will attend the next Syria talks and we're not going to boycott them because of Iran or anybody else for that matter," he told reporters at the United Nations.

The U.N. chief urged Saudi Arabia to renew a ceasefire it ended this weekend with the Iran-allied Shi'ite Houthi group in Yemen that it has been bombing for nine months. 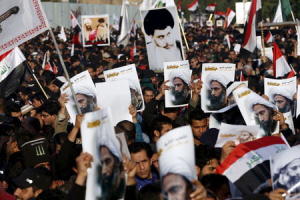 Trade between Saudi Arabia and Iran is small compared with the size of their economies, but some business is routed through the United Arab Emirates; comprehensive figures are not available. Investment ties are also minimal, though Saudi food conglomerate Savola <2050.SE> has major manufacturing operations in Iran.

Saudi Arabia executed Nimr and three other Shi'ites on terrorism charges on Saturday, alongside dozens of Sunni jihadists. Shi'ite Iran hailed him as a "martyr" and warned Saudi Arabia's ruling Al Saud family of "divine revenge".

Shi'ite groups united in condemnation of Saudi Arabia while Sunni powers rallied behind the kingdom, hardening a sectarian split that has torn apart communities across the Middle East and nourished the jihadist ideology of Islamic State.

Western powers, many of which supply billions of dollars worth of weaponry to Gulf Arab powers, tried to tamp down the tensions with Iran but also deplored the executions, as human rights groups strongly criticized Saudi Arabia's judicial process and protesters gathered outside Saudi embassies.