FRESNO, Calif. (AP) — State water regulators voted Tuesday to extend emergency conservation measures because of a drought, even though an increase in rain and snow this winter has improved California's snowpack.

But with the drought still severe, conservations efforts fell off in December. Officials said residents used 18 percent less water than in December 2013, but that was the worst showing in seven months of tracking and fell well short of Gov. Jerry Brown's goal of 25 percent.

It's also the third straight month that the state missed its target.

California, however, will likely beat its long-term conservation goal, saving a combined 25.5 percent since Brown issued the mandate in June calling for savings from 2013 use rates, the State Water Resources Control Board reported.

State water managers are looking ahead to April 1 — when the Sierra Nevada snowpack is historically at its deepest before melting and feeding rivers and streams and replenishing depleted reservoirs.

The snowpack's depth then will signal whether drought conditions are easing after the state's driest four-year period on record. 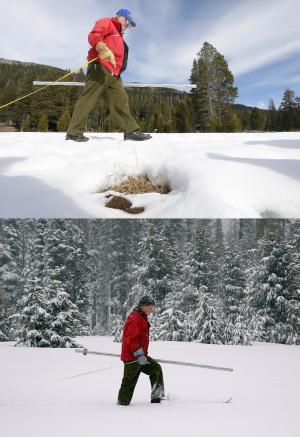 "We're at halftime," water board chair Felicia Marcus said in an interview. "We're not doing too badly, but we certainly haven't won the game yet."

The water content of the snowpack on Tuesday measured 130 percent of its historical average for this time of year.

Under a light snowfall, snowpack survey chief Frank Gehrke plunged a measuring pole into 76 inches of snow near Echo Summit in the Central Sierra region that includes Lake Tahoe.

"It's certainly a very encouraging start to the winter," said Gehrke, chief of the California Cooperative Snow Surveys Program for the Department of Water Resources.

Still, he said, the state needs to see storms each week to ease the drought. The snowpack provides nearly one-third of California's water supply. 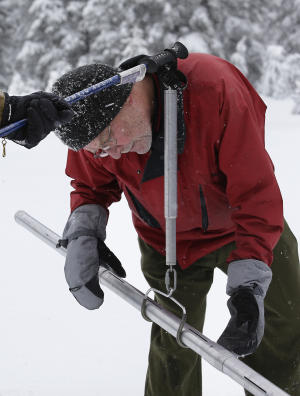 Frank Gehrke, chief of the California Cooperative Snow Surveys Program for the Department of Water R …

An electronic measurement collected by more than 100 sensors throughout the Sierra has shown the snowpack at 114 percent.

Under the extended drought regulation, cities that are especially hot, dry or crowded or that have managed to come up with new sources of water would get a slight break. The statewide conservation is expected to net a savings of at least 20 percent instead of last year's goal of 25 percent, officials said.

They wanted more credit for investing millions in drought resilient projects and those built before 2013, a cutoff date set by the state for local districts to qualify for cuts up to 8 percent from their individual targets. 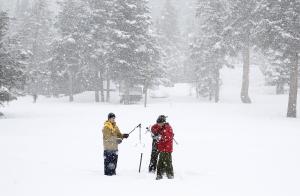 Frank Gehrke, right, chief of the California Cooperative Snow Surveys Program for the Department of  …

They urged state officials to replace the emergency regulations with long-term water policy.

The Sacramento Suburban Water District invested $120 million in groundwater storage a decade ago, making it drought proof, said the district's general manager Robert Roscoe. Yet, he said the district is held to high conservation standards.

"We did precisely what we were supposed to do," Roscoe said before the water board voted. "We anticipated a drought, were proactive and we made a huge investment."

The new regulation would extend through October. But water officials said they would review it again in the spring. By then, they say it will be clearer whether California is still in drought.