Ankara (AFP) - Turkish President Recep Tayyip Erdogan on Saturday embarks on a major tour of Latin American countries in a bid to expand Ankara's ties outside its traditional sphere of influence.

His visits to Peru and Ecuador are the first-ever by a Turkish president and the stop in Chile is the first since late president Suleyman Demirel travelled there back in 1995.

Regional and international issues will be on the agenda during talks with the leaders of South America, where Erdogan is also expected to attend business forums to intensify economic links.

Erdogan had already in February 2015 visited Cuba, Colombia and Mexico.

The Turkish president's itinerary will take him to Chile and then Peru before wrapping up his visit in Ecuador, the presidency said, adding that the trip "shows the importance we attach to the countries of Latin America."

Turkey is seeking to diversify its partners beyond its traditional sphere of influence within the bounds of the former Ottoman Empire in the Middle East and the Balkans, analysts say.

"The visit is part of Turkey's longer term ambition to expand its presence in Latin America, both to increase Turkish influence globally and also to reach out to new potential trade partners," said Aaron Stein, a senior fellow at the Atlantic Council, a US think tank. 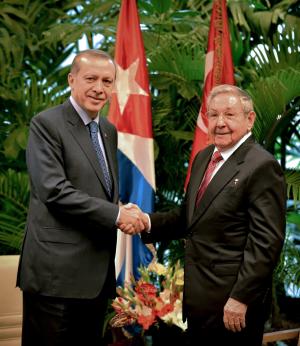 With its opening to Latin America, Turkey appears to want to forge new alliances in new regions at a time of tricky ties with the United States, the European Union and Russia.

One of Turkey's major trade partners, Russia has imposed sanctions against Ankara after one of its war jets was shot down in November on the border with Syria.

"It is part of Turkey's overarching ambition to deepen its relations with a range of actors, independent of its alliance with the United States and individual EU member countries," he told AFP.

"It is a continuation of a foreign policy trend put in place in the mid-2000s."

Turkey's "multi-vector" foreign policy also covers Africa, which has been the subject of significantly greater interest from Turkey and visits by Erdogan in recent years.

Prime Minister Ahmet Davutoglu, a former foreign minister, is seen as the architect of this policy, pushing for a pivotal role for Turkey in global and not just regional affairs.

This newly-assertive foreign policy by a key NATO member was slammed in some quarters for being "neo-Ottoman" and for drifting away from its Western axis.

Erdogan's advisor Ibrahim Kalin has attacked such criticism for seeing the world through the "lenses of a Eurocentric world system".

"Some even go so far as to see African and Latin American openings as diversions or 'moving away' from the West," he wrote in the pro-government Sabah Daily last year.

"One wonders what meaning such analyses have in a world of growing interdependencies and new geo-political opportunities."

In a sign of its growing soft power, Turkey's soap operas are taking Latin American countries by storm, prompting TV executives across the continent to start importing Turkish series to a region more used to exporting its own "telenovelas".