Featured
China hits back at US: ‘No compromise on Taiwan’ 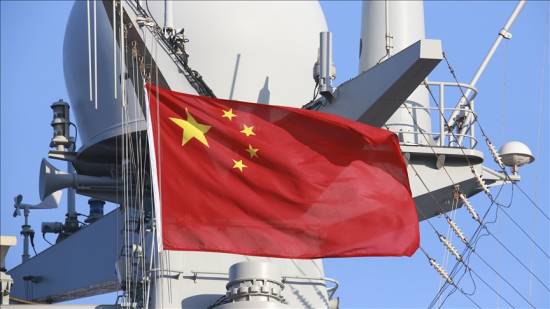 China hit back at US President Joe Biden on Friday for calling Taiwan an “inalienable part” which begets “no compromise.”

“The Taiwan question is purely China's internal affairs that allow no foreign interference. On issues that bear on China's sovereignty, territorial integrity and other core interests, no one shall expect China to make any compromise or trade-offs,” Chinse Foreign Ministry spokesman Wang Wenbin said at a news conference in Beijing.

China’s strong reaction came after Biden said Thursday that the US would come to Taiwan’s defense should China attack the island nation.

“No one should underestimate the resolve, the will and the ability of the Chinese people to defend their national sovereignty and territorial integrity,” said Wang, urging Washington to “earnestly abide by the one-China principle and stipulations in the three China-US joint communique.”

Beijing claims Taiwan, an island nation of 24 million people, as its “breakaway province,” while Taipei has insisted on its independence since 1949 and has diplomatic relations with at least 15 countries.

Biden’s statement came in the wake of recent increased Chinese air activity above the Taiwan Strait which was criticized by the US, while Beijing insisted against interference in “China’s internal issues.”

But Beijing asked Washington to “avoid sending wrong signals to the ‘Taiwan independence’ separatist forces, lest it should seriously damage China-US relations and peace and stability across the Taiwan Strait.”

The US formally recognized China in 1979 and shifted diplomatic relations from Taipei to Beijing, including Taiwan as part of mainland China.​​​​​​​

The Taiwan Relations Act, a 1979 law, has guided US relations with Taiwan. Relations have also been informed by what is known as the Three Communiques, which are bilateral agreements with China.

In response to a question about allegations of oppression against ethnic Uyghurs and other ethnic minorities in Xinjiang province, Wang said such accusations as “lies.”

“A small number of Western countries, based on disinformation, rumors and lies, keep attacking and maligning China on issues relating to Xinjiang and other matters and interfering in China's domestic affairs with human rights as a disguise,” he said.

He added that Cuba delivered a joint statement on behalf of 62 countries at the Third Committee of the 76th Session of United Nations General Assembly, stressing that issues related to Hong Kong, Xinjiang and Tibet are China’s “internal affairs that brook no interference by any external forces and expressed support for China's implementation of One Country, Two Systems in Hong Kong.”

Calling out the troika of the US, UK, and Australia for a new defense pact called AUKUS, under which Australia will get nuclear-powered submarines, Wang termed the “justification” behind the pact as “feeble.”

“Their feeble argument cannot address the concerns of regional countries and the wider international community,” said Wang, referring to parties of the pact.

“This Anglo-Saxon ‘clique’ created by the three countries is a typical military bloc that smacks of obsolete Cold War zero-sum mentality,” he said.

Wang said the move to export nuclear submarines to Australia was taken “out of geopolitical and economic considerations.”

“They did so in violation of the object and purpose of the Nuclear Non-proliferation Treaty, creating risks of the proliferation of nuclear materials and technology,” he said, calling the troika “typical rules-breakers.”

“It is a reflection of the three countries' obsession with force,” he said.

Wang said the trilateral cooperation is “bound to undermine efforts to build a Nuclear-Weapon-Free Zone in Southeast Asia.”

“Where is their respect for ASEAN centrality?” he said, referring to the 10-member Association of Southeast Asian Nations./agencies

Amnesty calls for repatriation of 27,000 children held at Syrian camp
Wednesday, 01 December 2021
Amnesty International called Tuesday for the repatriation of at least 27,000 children held in dire
Turkish aid group to give relief amid deadly drought in Somalia
Wednesday, 01 December 2021
A Turkish humanitarian aid group announced Tuesday that it will take part in an ongoing relief
US held responsible for deaths of thousands of civilians in Syria
Wednesday, 01 December 2021
The US and the international coalition forces it leads are being held responsible for the deaths of
After US refuses to pay up, $1.4 MLN raised for wrongfully jailed Black man
Tuesday, 30 November 2021
The prison gates finally have been flung open for a Missouri man who spent almost half a century
Pentagon to probe 2019 airstrike that killed civilians in Syria's Baghuz
Tuesday, 30 November 2021
The US Defense Department will investigate a 2019 airstrike in the Syrian town of Baghuz that
Syrian regime forces kill 2 civilians in Daraa
Tuesday, 30 November 2021
Two civilians were killed Monday in an attack by forces of Syria’s Bashar al-Assad regime in
Tweets by mugtama_english