US: 'We feel incredibly betrayed': Thousands of Guardsmen forced to vacate Capitol 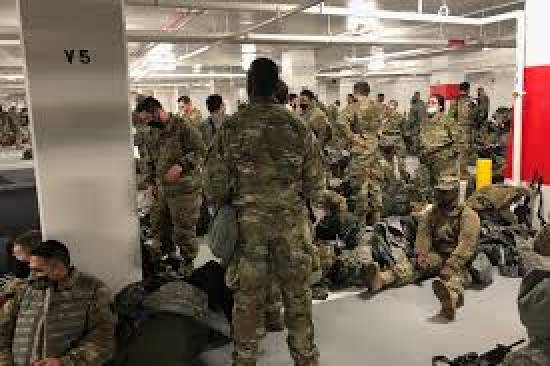 Thousands of National Guardsmen were allowed back into the Capitol Thursday night, hours after U.S. Capitol Police officials ordered them to vacate the facilities, sending them outdoors or to nearby parking garages after two weeks pulling security duty after the deadly riot on Jan. 6.

One unit, which had been resting in the Dirksen Senate Office building, was abruptly told to vacate the facility on Thursday, according to one Guardsman. The group was forced to rest in a nearby parking garage without internet reception, with just one electrical outlet, and one bathroom with two stalls for 5,000 troops, the person said. Temperatures in Washington were in the low 40s by nightfall.

“Yesterday dozens of senators and congressmen walked down our lines taking photos, shaking our hands and thanking us for our service. Within 24 hours, they had no further use for us and banished us to the corner of a parking garage. We feel incredibly betrayed,” the Guardsman said.

POLITICO obtained photos showing the Guard members packed together in the parking garage, sleeping on the ground.

All National Guard troops were told to vacate the Capitol and nearby congressional buildings on Thursday, and to set up mobile command centers outside or in nearby hotels, another Guardsman confirmed. They were told to take their rest breaks during their 12-hour shifts outside and in parking garages, the person said.

Top lawmakers from both parties took to Twitter to decry the decision and call for answers after POLITICO first reported the news Thursday night, with some even offering their offices to be used as rest areas. Senate Majority Leader Chuck Schumer (D-N.Y.) tweeted: “If this is true, it's outrageous. I will get to the bottom of this.” And Sen. Tom Cotton (R-Ark.) noted that the Capitol complex remains closed to members of the public, “so there’s plenty of room for troops to take a break in them.”

By 10 p.m., Sen. Martin Heinrich (D-N.M.) said the situation was “being resolved” and that the Guardsmen would be able to return indoors later in the night.

“Just made a number of calls and have been informed Capitol Police have apologized to the Guardsmen and they will be allowed back into the complex tonight,” added Sen. Tammy Duckworth (D-Ill.), who lost both of her legs in combat. “I’ll keep checking to make sure they are.”

A Guard source confirmed late Thursday night that all troops in the parking garages were ordered to return inside the Capitol.

In a statement, Capitol Police spokesperson Eva Malecki said the department recently asked that troops’ shifts be reduced from 12 hours to eight in order to allow for additional rest hours away from the Capitol complex. The statement did not explain why the Guardsmen were forced into parking garages.

Guardsmen who spoke with POLITICO were not given a clear reason why they were asked to vacate the buildings. The first Guardsman said it may have been due to a complaint that some troops were not wearing masks, but denied that was the case.

“We have strict guidance that masks are to be worn at all times unless soldiers are eating and drinking,” the Guardsman said.

“As Congress is in session and increased foot traffic and business is being conducted, Capitol Police asked the troops to move their rest area,” Murphy said. “They were temporarily relocated to the Thurgood Marshall Judicial Center garage with heat and restroom facilities. We remain an agile and flexible force to provide for the safety and security of the Capitol and its surrounding areas.”

Guard leadership did not make the decision and are “doing their best to provide rest shelter for troops who are still on 12-hour shifts protecting the Capitol and congressional grounds,” the second Guardsman said.

“There really may be an important reason for us to vacate and it just hasn’t been well communicated yet,” the second Guardsman said.

The troops are particularly concerned about being packed in tight quarters with limited bathroom access during a pandemic. At least 100 Guardsmen have tested positive for Covid-19, according to two Guardsmen. Some are quarantining in hotels.

A spokesperson previously declined to provide a specific number for troops who have tested positive for the virus.

After images went viral last week of troops sleeping on the floor in the halls of Congress, Guardsmen protecting the Capitol were initially provided cots, POLITICO first reported.

Thousands of troops have already left Washington after around 25,000 were called to D.C. to help defend it from potential threats ahead of President Joe Biden’s inauguration on Wednesday.