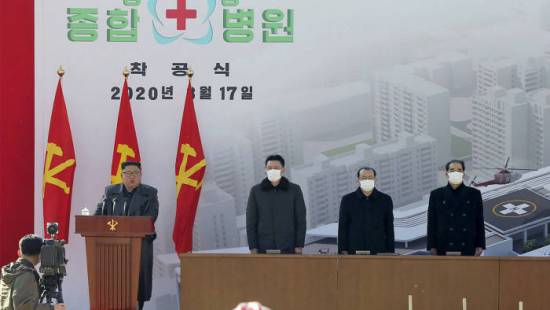 (Bloomberg) -- North Korean officials have sought urgent help from international contacts to increase coronavirus testing in a nation that could see its dilapidated health care system be crushed by an outbreak, the Financial Times reported.

People familiar with the matter said the requests have come in over the past few weeks, the newspaper reported Thursday, saying it had seen one of the documents requesting aid. At least 590 people have been tested, all of whom arrived from overseas in January and had negative results, it reported, citing one person directly familiar with the situation inside North Korea.

Bordered by China, where the virus originated, and South Korea, which has been among the hardest hit, North Korea claims it has evaded the pandemic with no cases of infection. But diplomats and experts piecing together the clues and who have previously spoken to Bloomberg News see a different picture.

North Korean leader Kim Jong Un brought his already isolated country to a near standstill by sealing the borders in January to stop the virus, which halted the trickle of legal trade and tourism. But even that may not have been enough. The U.S. is “fairly certain” there are coronavirus cases in North Korea because of a noticeable lack of military activity, General Robert Abrams, commander of U.S. Forces Korea, told reporters in a teleconference briefing in March.

Who Knows How Many Virus Cases North Korea Has. It Says Zero

Due to a crumbling medical system, sanctions restricting trade and decades of economic mismanagement that have left more than 40% of its population chronically undernourished and vulnerable to disease, North Korea runs enormous risks of a coronavirus outbreak turning into a humanitarian disaster that could lead to mass deaths -- and leave it as a disease reservoir even as the tide turns in Asia.

Those concerns have prompted aid organizations and North Korean allies like Russia to rush in medical supplies and others to offer help.

The United Nations has warned that maintaining economic sanctions on countries including North Korea, Iran and Venezuela could have a debilitating effect on health care systems and human rights.

“At this crucial time, both for global public health reasons, and to support the rights and lives of millions of people in these countries, sectoral sanctions should be eased or suspended,” UN High Commissioner for Human Rights Michelle Bachelet said Tuesday in a statement. “In a context of global pandemic, impeding medical efforts in one country heightens the risk for all of us.

Germany Approves Tighter Social Network Rules on Hate Speech
Friday, 03 April 2020
(Bloomberg) -- German Chancellor Angela Merkel’s cabinet approved rules for social media
Asian-Americans attacked, spit on and blamed for COVID-19 outbreak
Thursday, 02 April 2020
LOS ANGELES (KABC) -- Since the coronavirus pandemic started to appear, Asian-Americans have been
Chinese Doctor Disappears after Blowing the Whistle on Coronavirus Threat
Thursday, 02 April 2020
Wuhan doctor Ai Fen, who expressed early concerns about the coronavirus to the media, has
Coronavirus: Millions will be left in poverty, World Bank warns
Thursday, 02 April 2020
The financial impact of coronavirus will stop almost 24 million people from escaping poverty in
India’s coronavirus lockdown threatens to turn into human tragedy
Wednesday, 01 April 2020
A week after Narendra Modi ordered the largest national lockdown the planet has ever seen and
How religious groups are gathering without gathering
Monday, 30 March 2020
A Catholic priest in Georgia presided from his Jeep. There are drive-up prayers in Washington, D.C.
Tweets by mugtama_english