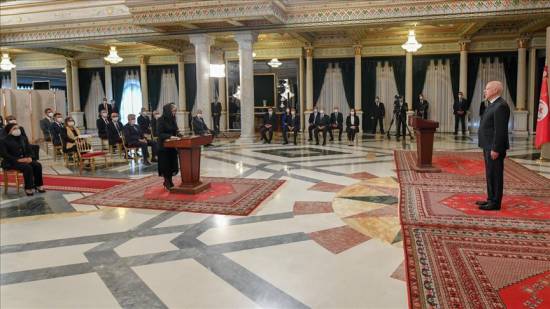 The Ennahda Party in Tunisia described the new government headed by Najla Bouden as a "de facto government" on Thursday because it said its formation violates the constitution.

The moderate Islamist party said it rejects the violation of constitutional procedures in forming a government.

"It is a de facto government, it is the government of the unconstitutional decree 117," the statement said, in reference to a power grab by President Kais Saied.

The new Bouden government was sworn in on Monday -- two weeks after she was appointed new prime minister by Saied.

The president ousted the government on July 25, suspended parliament and assumed executive authority. While he insists that his "exceptional measures" are meant to "save" the country, critics accuse him of orchestrating a coup.

The majority of parties in Tunisia reject Saied’s power grab, with some accusing him of orchestrating a coup against the Constitution. Other parties, however, think Saied’s decisions are correct in light of the political, economic and health crises the North African country is facing.

Tunisia has been seen as the only country that succeeded in carrying out a democratic transition among Arab countries that witnessed popular revolutions toppling ruling regimes, including Egypt, Libya and Yemen./agencies