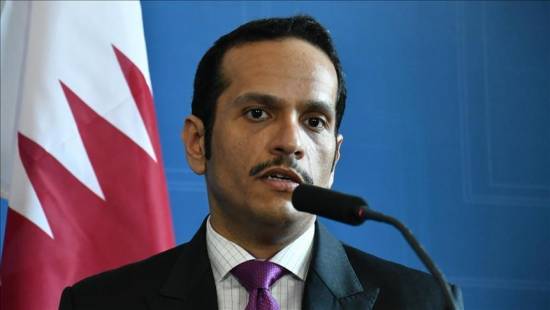 This came during the second day of the Global Security Forum held in the Qatari capital, Doha.

Bin Abdul Rahman stressed that regional peace process does not have any horizon and therefore the Abraham Accords between Arab countries and “Israel” cannot contribute to resolving the crisis.

"We do not see any prospects for the peace process, and therefore we believe that the Abraham Agreement (signed by the United Arab Emirates, Bahrain, Morocco and Sudan with “Israel”) cannot contribute to resolving the crisis," the top diplomat said.

"We should not focus on economic normalization and forget the (Israeli) occupation of Arab lands."

The Qatari minister said his country's relations with the US "extend for decades”.

“We have strong relations with various American administrations, and even with the administration of Trump," he said, adding that the relation between Doha and Washington "is important for security and stability in the Gulf region."

Doha is a "neutral mediator and has maintained its neutrality and good relations with the various Afghan sides," he said. “We should not view Afghanistan as an arena for competition, but rather a cooperative approach must be adopted by various international parties."

Regarding the Gulf relations, the Qatari minister said, "there was no winner in the Gulf crisis, but rather we wasted three years, and that the real victory was only when the Al-Ula agreement was signed."

On the Iranian issue, the Qatari foreign minister said that his country "deals with Iran as a neighboring country and is considered a major player in the region".

“It is in our interest that the nuclear agreement with Iran returns to what it was in order to avoid a nuclear race in the region,” he said.

Bin Abdul Rahman expressed his optimism about the Iranian-Saudi communication, saying: "We encourage the positive momentum that is taking place between Iran and Saudi Arabia."

On Oct. 4, Saudi Foreign Minister Faisal bin Farhan revealed that Riyadh held a fourth round of direct negotiations with Tehran on Sept. 21, and that the talks were still in their "exploratory" stage.

Saudi Arabia and Iran severed diplomatic ties in January 2016 following an attack on the Saudi Embassy in Tehran after Shia cleric Nimr al-Nimr was executed by Saudi authorities. Relations between the two rivals deteriorated further after Iran in September 2016 accused Saudi authorities of deliberately causing the deaths of around 400 Iranian pilgrims in a 2015 stampede in the Muslim holy city of Mecca.

The two sides have since been engaged in a strong regional rivalry, often accusing each other of waging a proxy war for regional influence./agencies