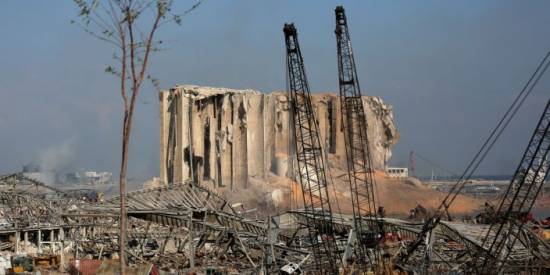 Lebanon's devastating blast came in the middle of an unprecedented economic crisis, frequent power outages, and hospitals struggling to contain the coronavirus

•             The timing is devastating. Lebanon is currently in the depths of an economic and political crisis.

•             The country's hospitals are also struggling with the coronavirus outbreak, with many experiencing shortages of personal protective equipment and ventilators.

•             After the explosion, many hospitals were so badly damaged that they could not admit any more victims.

The source of the explosion was a store of 2,750 tons of ammonium nitrate kept at the docks for years, Prime Minister Hassan Diab said later on Tuesday. Emergency services are scrambling to recover any survivors from the rubble.

The blast could not have come at a worse time for the country.

Since October 2019, the economy had already been in crisis due to rampant government corruption and excessive borrowing, forcing businesses to close and people to lose their jobs.

The coronavirus pandemic made everything worse. Lebanon is dependent on its imports, and the global production slowdown due to the coronavirus made goods more expensive, making everyday necessities — like bread — too expensive for many citizens to afford.

Businesses closed for months during the lockdown, and the cost of food skyrocketed — with the price of subsidized bread rising 33% between October and late June, according to Reuters.

Resulting job cuts have also been sweeping and ruthless. Unemployment is currently at 33%, 45% of Lebanese people live below the poverty line, as Business Insider reported last month.

Lebanon's currency — the lira — has also depreciated 80% since last October and the economy shrunk 6.5% in 2019, the International Monetary Fund (IMF) said in April.

Rolling blackouts, lasting as many as 22 hours at a time, are also common, due to shortages of the oil and diesel needed to power the grid.

Lebanon's politicians have also been slammed for dragging their feet over securing a much-needed rescue package from the IMF.

For months, government officials could not agree on how much the economy had contracted, and how much was needed to balance the books. Henri Chaoul, an adviser to the Lebanese government working with the IMF, resigned in June, saying the government "opted to dismiss the magnitude of these losses."

Lebanon is $90 billion in debt and defaulted on its external debt in March. The government ultimately asked the IMF for $10 billion on April 30.

Aya Majzoub, a researcher at Human Rights Watch, said in a Monday statement: "Lebanon's people are being robbed of basic rights every day while politicians squabble over the size of the country's financial losses and hamper efforts at reform."

Hospitals buckling under the weight of COVID-19 and the blast

The health sector, now given the added task of caring for those injured in the blast, had already been struggling with coronavirus amid the economic crisis.

There is a dire shortage of personal protective equipment (PPE) and the ventilators desperately needed to keep those most ill with the coronavirus alive.

Daily case data shows that the coronavirus is still on the rise in Lebanon.

Tuesday's explosion has been devastating for Beirut's hospitals: many were so badly damaged that they cannot admit any more patients.

Lebanon had hoped last year that a change in its top leadership would improve its political and economic crisis.

Saad Hariri resigned as prime minister in late October 2019 after a fortnight of protests that started on October 13, 2019.

"I have reached a dead end, and we need a big shock to counter this crisis," Hariri said at the time. The past few months have shown that little has changed, and the devastating explosion is set to make things worse.