Fact check: COVID-19 restrictions are not related to imposition of Sharia law 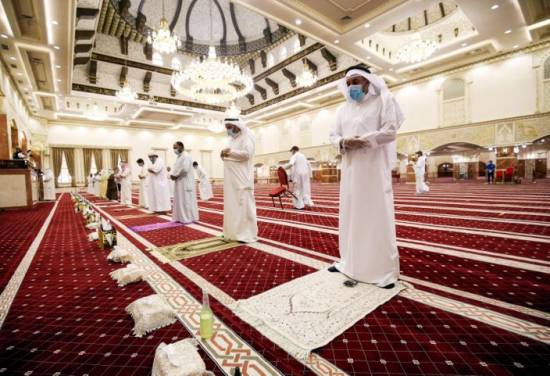 The claim: Steps to limit the spread of COVID-19 are the first moves to impose Sharia law in the United States.

This social media post claims that steps adopted in the United States to limit the spread of the coronavirus — such as the slaughter of hogs; closing of bars and churches; and cancellation of sports — are actually part of a secret agenda to facilitate the spread of Sharia law.

Misspelled in the post as "shiria," Sharia law provides a framework by which Muslims may live their lives. It is based on the Quran and the teachings of the Prophet Muhammad.

According to the Library of Congress, some provisions of Sharia law clash with Western concepts of personal freedom and equality between the sexes. That also has made it an easy target for extremists to point to when attempting to vilify or demonize Muslims. I wonder if thi

The social media post states that among the actions that point to the adoption of Islamic law in the U.S. is the slaughter of 700,000 pigs a week. Muslims avoid all pork products for religious reasons.

The coronavirus outbreak forced the closure of slaughterhouses across the country. Demand from restaurants, closed by the pandemic, has also dropped. That has left farmers with more pigs than they can handle, leaving them often with little choice but to euthanize their hogs, according to The Associated Press. The slaughter of the pigs has nothing to do with Islam.

The post also states bars, along with churches, are closed in accordance with Muslim beliefs. This is true, but has nothing to do with Sharia law.

The moves are tied to social distancing measures backed by science and health officials, and adopted by the U.S. – and much of the rest of the world – to limit the spread of COVID-19. This includes limits on houses of worship, where people gather together in large numbers and often in close quarters.

Many of those temporary closures have now been lifted as states slowly begin to reopen their economies, with most restaurants allowed to offer in-house dining and even bars opening in some places.

But the reopening has led to a spike in COVID-19 cases in several states, prompting governors in Texas and Florida  last week to announce the re-implementation of several mitigation measures — notably the closure of bars.

And to the claim that mosques have remained open, in line with Islamic law, while churches are closed — that has been debunked by FactCheck.org.

Ibrahim Hooper, spokesman for the Council on American-Islamic Relations, a major Islamic civil liberties organization, told FactCheck.org that even during Ramadan, “I personally know of no mosques remaining open for prayers.”

Lastly, the post states that sports are canceled. (There is debate among Muslims over whether sports are permissible, according to the website UmmahSport, which presents stories involving Muslim athletes.)

Global sports have not been permanently canceled. Sports also are slowly returning, with NASCAR and the PGA Tour already back up and running and most professional team sports, including the NBA, NHL and Major League Baseball, planning to start training again by mid-July.

We rate this claim as FALSE. The steps taken are scientifically based and are recommended by health officials worldwide to try to stem the spread of COVID-19. The social distancing measures are not based on the views of one religion.

Rohingya: Tripartite moot raises hopes, skepticism
Sunday, 17 January 2021
Bangladesh is going to host an important tripartite meeting on the Rohingya repatriation issue,
Bangladesh Plans to Relocate Rohingyas to the Remote Island of Bhasan Char
Sunday, 17 January 2021
In 2015, the government of Bangladesh proposed a relocation of the displaced Rohingyas to Bhasan
Rohingya: Why Bangladesh is in a diplomatic fix over Saudi repatriation
Saturday, 16 January 2021
Riyadh has urged Bangladesh to take back some 54,000 Rohingya that are currently in Saudi Arabia.
Robert Saleh to be first Muslim to lead an American football team
Saturday, 16 January 2021
WASHINGTON(AA) The New York Jets have announced they reached an agreement in principle to hire
US bans cotton, tomato imports from China’s Xinjiang
Thursday, 14 January 2021
The US banned certain products imported from China’s Xinjiang province, home to the Uighur
What new bureaucratic framework means for Kashmir
Monday, 11 January 2021
SRINAGAR, Jammu and Kashmir A new change in the bureaucratic framework of Indian-administered