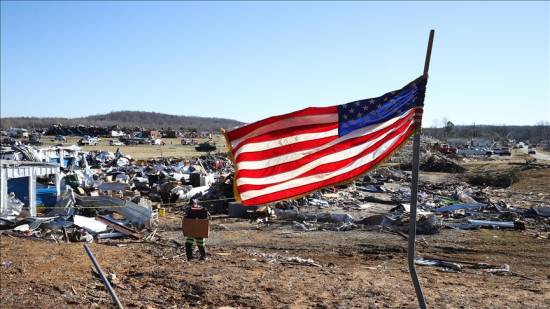 The US state of Kentucky now has 74 confirmed deaths from this weekend's tornadoes, Governor Andy Beshear said Monday.

"We expect that this death toll will continue to grow," Beshear said at a press conference, updating an earlier tally of 64 deaths after at least four tornadoes tore through the state from Friday night into Saturday.

At least 109 people remain unaccounted for as of Monday afternoon.

Earlier in the day, the governor said "undoubtedly there will be more" deaths, adding: "We believe it'll certainly be above 70, maybe even 80."

The victims’ ages range from 5 months old to 86.

In addition, President Joe Biden will visit Kentucky on Wednesday to survey the damage from the deadly tornadoes. He will give a storm briefing at Ft. Campbell and survey the damage in the cities of Mayfield and Dawson Springs.

Mayfield, Kentucky was the hardest hit, leaving it a pile of "matchsticks," according to Mayor Kathy O'Nan. Thousands of people are facing housing, water and power shortages./aa