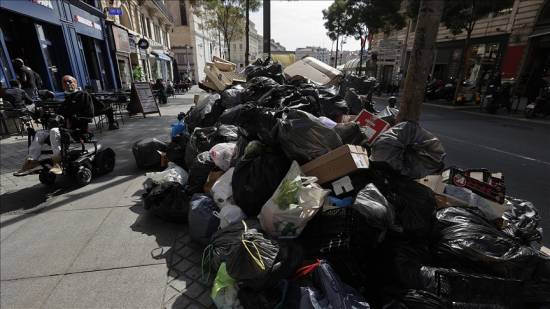 The streets of Marseille in southern France are filled with trash as garbage collectors went on strike, protesting the municipality's decision to increase working hours.

Marseille decided that collectors will have to work 1,607 hours annually, 35 hours per week, without additional pay. Workers then went on strike because they used to work 1,286 hours annually.

After the work action began last Thursday, annual working hours were reduced to 1,530 but workers were not satisfied.

While about 10 unions support the strikes, Marseille and its surroundings are affected.

The strike is expected to continue as the municipality is not budging from its position.

Deputy Mayor Roland Mouren said the municipality has to abide by the law and could not make changes.

The strike has left the city center and its surroundings filled with garbage, and trash piles are visible around downtown Vieux Port, nearby restaurants and cafes.

Residents interviewed by Anadolu Agency demanded a swift solution to the crisis.