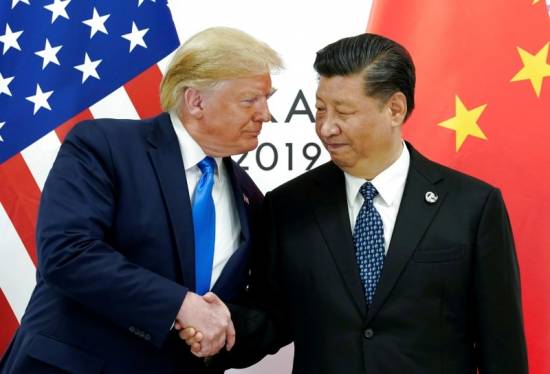 President Donald Trump on Friday threatened to increase tariffs on imports from Hong Kong and to take other action to punish China for what he called "deeply troubling" moves to exert more control over the former British colony.

In one concrete step, Trump issued a proclamation on Friday to bar Chinese graduate students with potential military ties from studying the United States in an effort to protect research done at U.S. universities against Chinese intellectual property theft.

In another move, Trump said the United States was withdrawing from the World Health Organization, which he has criticized for being too soft on China during the early stages of the coronavirus pandemic.

In perhaps the most significant trade action, Trump said his administration would take steps to revoke Hong Kong's preferential treatment as a separate customs and travel territory apart from the rest of China.

For Hong Kong, which has long enjoyed exemptions from U.S. rules on China, such a move would expose its exports to the same duties that Trump has unilaterally imposed on more than $350 billion worth of Chinese goods.

However, Trump's broader pronouncements seem to insulate the financial, international trade and other business relationships both Hong Kong and China enjoy, at least for now.

U.S. stocks rallied after the speech, reflecting relief among investors that Trump did not further roil relations with Beijing by pulling out of a phase one trade deal that both countries signed in January.

In one sign that China may not meet ambitious purchase targets under that trade deal, the U.S. Agriculture Department on Friday lowered its estimate by $1 billion on how much farm goods the United States will send to China in the current fiscal year, which ends in September.

Trump's actions follow a vote by the China's top legislature on Thursday to impose new national security laws on Hong Kong, increasing doubts about the future of the “one country, two systems” principle that has guided relations between Beijing and Hong Kong for more than two decades.

"The Chinese government moves against Hong Kong is the latest in a series of measures that are diminishing the city's long-standing and very proud status. This is a tragedy for the people of Hong Kong, the people of China and indeed the people of the world," Trump said.

Chinese officials have denied they intend to eliminate Hong Kong's limited self rule under the “one country, two systems” principle that followed the end of British rule in 1997. But Secretary of State Mike Pompeo said this week the United States had determined Hong Kong was no longer sufficiently autonomous to warrant special U.S. treatment.

Hong Kong's special status under the 1992 U.S.-Hong Kong Policy Act has made it an attractive haven for American companies that want to sell into China and the rest of the surrounding region.

If Trump were to follow through with his threat to eliminate all special treatment for Hong Kong, there would be severe effects on U.S. companies operating there as well.

An estimated 85,000 U.S. citizens live in Hong Kong, many of them working for the more than 1,300 U.S. companies that have operations there. Nearly every major U.S. financial firm has a presence in Hong Kong, with hundreds of billions of dollars in assets under management, according to a 2019 State Department report.

Trump stopped short of imposing any sanctions that would affect the operation of U.S. financial firms that are heavily invested in Hong Kong. But he said he would instruct his presidential working group on financial markets to study the different practices of Chinese companies listed on the U.S. stock exchanges to better protect American investors.

Daniel Russel, a former Obama administration State Department official now at the Asia Society, agreed the measures Trump announced were "fairly vague" and said it remained to be seen how quickly and extensively they are implemented.

Russel, who was former President Barack Obama's point person on Asia, criticized China for its actions in Hong Kong but said Chinese leaders have clearly made a calculation that it can manage any response from the U.S.

It is "a failure of U.S. policy that the Chinese government is no longer worried about what Washington thinks, nor is it afraid that the Trump administration can muster a unified international response," he said.

Those who favor a more hard line confrontation with China were also unimpressed with the actions, which comes amid increasing anger in Congress over China's initial handling of the coronavirus outbreak and its treatment of Hong Kong.

"It’s not meaningful at all," said Derek Scissors, a China analyst at the American Enterprise Institute. "The Hong Kong part of his statements could have been said a week ago. What have they been doing since?"

Trump has also been criticized by his Democratic rival, former Vice President Joe Biden, whose campaign accuses of the president of talking tougher on China than he actually has been.

Still, ending or significantly curtailing Hong Kong's special status by subjecting it to Trump's tariffs could have more than symbolic importance.

"Hong Kong is only 3 percent of China's GDP, but it plays an outsize role in its economy and its connections to the rest of the world," said Scott Kennedy, a China analyst at the Center for Strategic and International Studies.

The actions aimed squarely at the Chinese regime could send a more powerful message.

The move to bar certain graduate students and post-doctrinal researchers could affect around 3,000 Chinese who come from China’s military-related universities, Kennedy said.

"It will harm those students but have the most marginal of effects in keeping American technology and know-how out of the hands of China’s military," he said.

The United States will also begin steps to impose sanctions on Chinese and Hong Kong officials "directly or indirectly involved in eroding Hong Kong's autonomy." The State Department will revise its travel advisory for Hong Kong "to reflect the increased danger of surveillance and punishment by the Chinese state security apparatus," Trump said./ Politico

Second Confederate statue removed in Richmond
Saturday, 04 July 2020
Washington (AFP) - Work crews acting on the orders of the mayor took down a second statue on
'Tired of burying our children': 4 toddlers shot in Chicago amid surge in gun violence
Saturday, 04 July 2020
CHICAGO – Four toddlers have been shot in the past two weeks during what has been
Italy slams Egypt's stance on killing as 'punch in the face'
Saturday, 04 July 2020
ROME (AP) — The president of the lower house of Italy's Parliament has slammed Egypt’s
U.N. says it is "alarmed" at arrests in Hong Kong, concerned at "vague" law
Saturday, 04 July 2020
GENEVA, July 3 (Reuters) - The U.N. human rights office voiced concern on Friday that "vague and
Sweden: Iran to compensate Ukraine plane crash victims
Friday, 03 July 2020
STOCKHOLM (AP) — Iran has agreed to compensate the families’ of the foreign victims of
'Resist until the end!' Crowds spill into streets of Hong Kong facing water cannon and arrest to protest new security law
Friday, 03 July 2020
They had been warned that merely chanting a slogan could risk prosecution under Hong
Tweets by mugtama_english