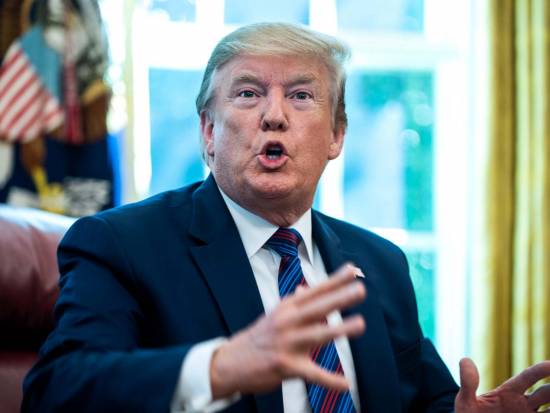 Donald Trump has shared a tweet from the far-right commentator Katie Hopkins describing the city represented by a congressman he has repeatedly attacked as a “s***hole”.

The president followed up the retweet with another attack on Elijah Cummings, who represents Baltimore, claiming there was "nothing racist" about his attacks on the congressman.

He said: "There is nothing racist in stating plainly what most people already know, that Elijah Cummings has done a terrible job for the people of his district, and of Baltimore itself. Dems always play the race card when they are unable to win with facts. Shame!"

The phrase used by Ms Hopkins is similar to one attributed to Mr. Trump when he reportedly referred to immigrants coming from "s***hole countries" during a White House meeting.

The president has denied that he ever used that phrase.

Mr. Trump caused outrage on Saturday when he claimed Mr. Cummings represented a "rat and rodent infested" district in a series of vicious tweets.

Baltimore's mayor, Bernard C “Jack” Young, said it was “completely unacceptable” for Mr. Trump to “denigrate a vibrant American City like Baltimore” and called the president “a disappointment… to the world.”

Trump attacks black congressman for second day in a row

Mr. Trump was criticized earlier this month when he retweeted a video by Ms. Hopkins supporting his racist attacks on four US congresswomen.

In addition, he retweeted an attack by the far-right commentator on Sadiq Khan, the mayor of London, with a personal comment added: “With the incompetent Mayor of London, you will never have safe streets!”

On Sunday, Ms Hopkins also went after CNN host Victor Blackwell, who emotionally defended his hometown in a speech that has since been shared thousands of times.

She accused the news anchor of "turning on the water-works" during his condemnation of Mr Trump's tweets.

Ms Hopkins, who once held jobs as a controversial columnist and radio host for the Daily Mail, The Sun and LBC, is a prominent supporter of jailed anti-Islam activist Tommy Robinson.

In September last year, she applied for an insolvency agreement in a last-ditch attempt to avoid bankruptcy after she lost a libel case to food writer and poverty campaigner Jack Monroe.

Kashmiri national day event shifts to Muzaffarabad
Friday, 10 July 2020
ISLAMABAD (AA) After authorities in the Indian-administered Kashmir decided to abandon the
US sanctions top Chinese gov't official in Xinjiang
Friday, 10 July 2020
The US on Thursday sanctioned a senior member of the Chinese Communist Party and three other
US commemorates victims of 1995 Srebrenica genocide
Friday, 10 July 2020
The US paid tribute to the 1995 Srebrenica genocide victims on Thursday, as it marked the 25th
Srebrenica, 25 years later: Lessons from the massacre
Thursday, 09 July 2020
Europe’s worst massacre since World War II occurred 25 years ago this July. From July 11 to
A man Assaults Muslim Woman In front Of Her Kids at a Park in Russia (video)
Thursday, 09 July 2020
Kashmiri leader calls for July strikes, protests
Wednesday, 08 July 2020
SRINAGAR, Jammu and Kashmir  Days after stepping down as head of the biggest pro-freedom