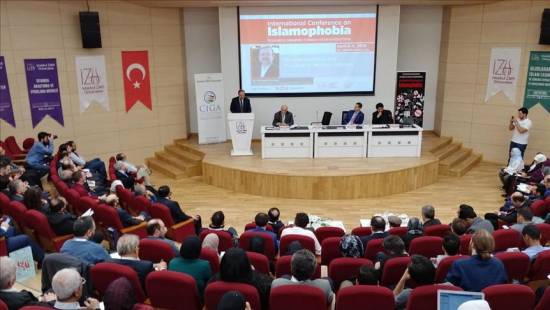 Twenty scholars from around the globe deliberated on the roots and geopolitics of Islamophobia at a three-day conference last weekend in Istanbul, Turkey.

They described Islamophobia as a very dangerous threat not only to Muslims but to all of humanity.

"In Myanmar, the native Rohingya have been brutalized, killed and expelled for their Muslim faith," said Mehmet Bulut, the rector of Istanbul Sabahattin Zaim University, which hosted the conference.

Bulut said it was incumbent on all "concerned citizens of the world" to address the dire problem of Islamophobia in all its manifestations.

"In India, Islamophobia has taken an ugly turn in Kashmir and other states, where Hindu nationalists have been turning peaceful co-existence into polarized communities. Uyghur Muslims [in China] are similarly being subjected to industrial-scale persecution,” he added.

The speakers said Muslims needed to educate themselves to fight this growing problem.

Anne Norton, professor of Political Science and Comparative Literature at the University of Pennsylvania in the U.S., said Islamophobia was part of a "greater network of bigotry and xenophobia" including that of antisemitism and anti-black racism.

During her speech, Norton said people needed to be protected from the power of the state as well as from "torture, hunger, separation from their families and deprivation".

"To combat Islamophobia and other forms of hatred and bigotry, we must learn to love difference," she said.

Discussing the geopolitics of Islamophobia, Salman Sayyid, professor of rhetoric and decolonial thought at the University of Leeds in the U.K., observed that Islamophobia "transcends geography", underlining that it was not the behavior of the victims that was to blame for Islamophobia.

"What did the Rohingya ever do to deserve their fate? It is not a problem of behavior," Sayyid said.

Explaining the dangerous role of think-tanks in rationalizing Islamophobia, Farid Hafez, a senior researcher and lecturer at the University of Salzburg in Austria, said “like the counter-jihad movement, some right-wing circles or different foundations support specific political interests. They are supporting think tanks in order to create knowledge”.

“They get funds in order to support, to analyze the reality; and what we can observe when it comes to anti-Muslim agendas within certain think tanks, they are following specific goals. They are offering expertise, offering advises to political actors," he added.

Asim Qureshi, research director at London-based advocacy group CAGE, said Islamophobia is a “kind of racism, not only because it employs the logic of racism, but also because it pathologizes Muslims”.

In her presentation on the rise of the alt-right and mainstreaming of anti-Muslim sentiment in the U.S., Dalia Fahmy, an associate professor of political science at Long Island University, said that there was a dramatic increase in anti-Muslim violence since 2015.

Speaking on how Islamophobia was used as a tool in supporting autocratic rule, Usaama al-Azami, a lecturer at the Markfield Institute of Higher Education in the U.K., said Arab autocracies were the world’s “most powerful Islamophobes”.

“[And] the geopolitical context of [such a phenomenon] is the Arab spring,” he said in his presentation.

His talk was corroborated by Sami Al-Arian, director of the Center for Islam and Global Affairs (CIGA), who said: “We have some governments in the region, in the Muslim world, who are helping Islamophobes and empowering practitioners of Islamophobia in order to fight their own citizens and movements because they are trying to keep their privileges and autocratic regimes.”

Hatem Bazian, a professor and lecturer at the University of California, Berkeley, said Western views of Islam are often constructed with limited or no actual engagement with Muslims -- theologically, culturally or philosophically.

“Islamophobia is not simply a form of cultural racism; it has roots in historical, biological racism against the inferior other,” he said.

“It is a deliberate network with deep political roots,” Bedier said.

“Islamophobia is more effective today because Muslims are weak,” he added.

In his recommendation, CIGA director Al-Arian said that understanding Islamophobia at every level is important and it needs to be confronted at all levels.

“We need to educate and then act to confront Islamophobia,” he stressed.

Talip Kucukcan, a former member of the Turkish Grand National Assembly and current professor at Istanbul’s Marmara University, said a legal framework against Islamophobia is needed.

“Otherwise, whatever work we do [to fight Islamophobia], it will melt down,” he said.

He insisted that politicians need to be involved in raising the issue of Islamophobia.

The Organization of Islamic Cooperation (OIC) has 57 member states, he said, and this issue needs to be raised and nation-states need to be engaged.

Speaking about Islamophobia in India, Varsha Basheer, an academic at the University of Kerala, said the Muslim community requires structural changes from within.

“We need power other than the intellect,” she added.

Elsadig Elsheikh, director of the global justice program at the Haas Institute for a Fair and Inclusive Society at the University of California, said there is a need for intervention at multiple levels, including society, education, public policy and “how we tell our story”.

“We need to decolonize ourselves, and there is a need for a lot of work within ourselves and our societies,” he said.

James Carr, a lecturer at the University of Limerick in Ireland, said Muslims need to "engage with the systems [of state] but with open eyes”.

"We need to display a robust Muslim identity," Carr said.

“Scholars need to translate their words into action,” she said.

“But by seeing that the people of New Zealand came together and stood in solidarity [with the victims] gives us hope as human beings in a world where there is increasing discrimination, increasing xenophobia and increasing Islamophobia which are linked together,” Kan said./aa