Calais (France) (AFP) - The stench of burning plastic hung over the "Jungle" migrant camp on Wednesday as dozens of riot police moved in for a third day to demolish the Calais shantytown.

Charred husks of shacks and smouldering logs marked the spots where half a dozen shelters were burned down overnight in the camp on the outskirts of the northern French port city.

The blackened shells sat alongside the now-empty stretch of land that has already been cleared in the southern half of the camp, the authorities' initial zone of operations.

It was not clear how the fires started -- whether they were acts of protest by evicted migrants, set by police as some activists claimed, or simply accidents caused by flying sparks from campfires spread in the freezing winter wind.

Police, who arrived in about 30 vehicles, formed lines to push back activists, charity workers and the press, but were clearly under orders to go easy on the refugees in the glare of the world's media.

"What do we do with that one?" called one policeman, pointing at a migrant who was walking into the no-go zone. 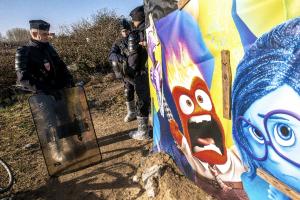 "Leave him -- only push back the whites," came the reply from a colleague.

As clear-up teams, town hall employees and police fanned out across the demolition zone hoping people would leave voluntarily, a small group of activists and migrants clambered on top of one of the shelters in a bid to frustrate the destruction of at least one of the makeshift homes.

"The refugees have asked us to help out of solidarity," said Rowan McAllan, a British woman who described herself as an "independent volunteer".

"These people have lost everything and come halfway across the world. They've managed to scrape together a very humble little abode in these conditions and now that's being taken from them," she said. 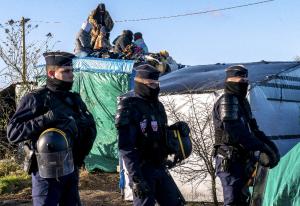 France wants the migrants, mostly fleeing war and poverty in the Middle East and north Africa, to move into other accommodation and reception centres.

The multiple refugee communities, activists and charity groups in the Jungle have argued over what to do now that the authorities appear to be moving towards the total closure of the camp.

Tempers flared at a meeting of refugee community leaders and aid groups on Wednesday, with some migrant leaders accusing volunteers of helping to move people out of the destruction zone rather than presenting a united front against the bulldozers, as previously agreed.

"First (the aid workers) tell us the police have no right to make us leave our houses, so we stay," said Sikander Nuristany, head of the Afghan community.

"But then the police come and make people leave their houses, so they become angry and say the police have no right. We need true information because this is making people get into fights with police," he added. 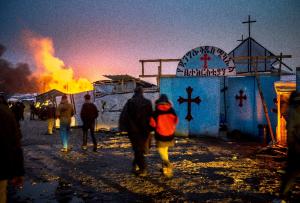 The confusion stems in part from the reluctance of local authorities to say whether the Jungle will be completely destroyed and how quickly.

The evicted migrants have been offered accommodation in one of around 100 centres across France or in heated shipping containers alongside the Jungle.

But many fear this will end their dream of sneaking across the Channel to claim asylum in Britain, where many have family or community ties, or believe there are better opportunities for finding work or education.

Wednesday's bad-tempered meeting between aid workers and refugee leaders was cut short to organise a funeral after a Sudanese man in his fifties, who had been suffering from respiratory problems, was found dead in his shack.

Friends said he had been to one of the official accommodation centres, but had been unimpressed with the conditions and returned to the Jungle. He was only one day away from hearing whether his asylum application in France had been successful.

Charities and volunteers have spent months replacing tents in the Jungle with wooden shacks to protect against the miserable northern French winter.

Many assume they will simply set up a "new Jungle" somewhere else along the French coast -- perhaps in the existing camps at Dunkirk or Tetenghem where conditions are even worse than in Calais.

"Tell us where is the next Jungle, a place for us to go, and we will go there," said Nuristany at the meeting.

Many are not waiting to be told -- several migrants were seen wandering out of the camp overnight with their meagre possessions bundled into backpacks.

"Who knows where they are going. It's impossible to know the level of fear and uncertainty they are experiencing at this point," said Tom Radcliffe of Help Refugees.