IDOMENI, Greece (AP) — Papers clutched tightly in their hands, hundreds of frantic refugees clamor for the attention of Greek police to fix documents the Macedonian authorities on the other side of the border rejected as potential forgeries — sometimes for problems as seemingly capricious as whether the color of the ink used to sign them is black instead of blue.

Along the Balkan migrant trail, similar bureaucratic nightmares are keeping people stuck at border crossings for days on end, even as they arrive on Europe's shores by the thousands. Many are openly voicing concerns that the paperwork hurdles are a deliberate attempt by reluctant countries to discourage them from reaching their destinations.

"They told us the signatures on our papers are not good. They told us to go back to Athens," said Montasr, a 26-year-old Syrian from Aleppo who managed to cross into Macedonia after waiting for days in the overflowing refugee camp on the northern Greek border at Idomeni, only to be sent back into Greece. He wouldn't give his surname to protect family still in Syria.

He claims that Macedonian authorities have told people to "go back to Syria" and get new ID cards or passports if the documents were dirty or battered.

"They are crazy or what? They will kill us if we go back to Syria," exclaimed Montasr, shaking his head in disbelief. "They just don't want us to go inside."

The handling of the refugee crisis has tested European unity like never before, with individual states varying dramatically in their responses. Some, like Austria and Hungary, are more hard line than others, and have imposed severe restrictions. Others, like Germany, which saw more than a million people claim asylum last year, have favored a more open response.

Mohamed Darwish, a 23-year-old from Aleppo, shows a picture of his severely sick 40 day-old daughter …

German Chancellor Angela Merkel, who has been both hailed and criticized for her response to the biggest movement of people in Europe since World War II, said it is counterproductive for European countries to implement individual measures.

"Unilateral solutions do not help us," she said Friday while meeting with French President Francois Hollande in Paris.

Border slowdowns and closures have meant migrants are now piling up in Greece, overwhelming the country's resources, she added.

Turkey would have to play a vital role in bringing down the number of migrants making the often-dangerous crossing to the eastern Greek islands such as Lesbos. On Monday, leaders from the European Union and Turkey are to meet in Brussels in a summit on how to move ahead.

As well as working closely with Turkey to stop the flow, Europe also has to secure its outer borders so it knows who is entering, Merkel said.

Mohamed Darwish, a 23-year-old from Aleppo, shows a picture of his severely sick 40 day-old daughter …

At the summit, the leaders will effectively decide the fate of people like Waez Ziad, a 51-year-old Syrian doctor from Aleppo who found that the color of the ink on the signature of his family's registration papers was deemed to be wrong.

"The Macedonian police say the signature is black and so is false," he said.

His family couldn't cross — a crushing blow after a tortuous two weeks or so when he, his wife and three children, aged 17, 13 and 2, slept in a field.

His wife was getting help from the Greek police on fixing the papers, he said. The family, like thousands of others, is hoping to make it to Germany. Returning to Syria is simply not an option. 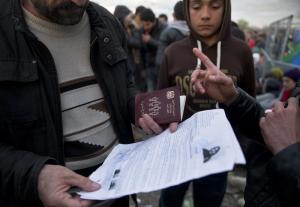 Greek police said the ink problem appeared suddenly over the past couple of days. To tackle it, they brought stamps to the camp to verify the signatures on the papers are genuine.

But other problems arose from slipshod work by authorities on the islands doing the registration. An inordinate number of people were recorded as having been born on Jan. 1. Police in the Idomeni camp were scrambling to fix those papers too, with a massive queue forming of desperate people clutching sheaves of paper.

A Macedonian police official, speaking on condition of anonymity because he was not authorized to speak on the record, said authorities suspected that signatures in black instead of blue ink or computer-generated stamps were simple copies rather than originals and therefore not genuine. The official said the checks were being conducted by police officers from Serbia, Croatia, Slovenia and Austria sent to Gevgelija to help Macedonian police.

Many of those with paperwork issues were being returned by police in Slovenia to Croatia, then from there to Serbia and finally to Macedonia, the official said, adding that several hundred Iraqis were stuck on both the Macedonia-Serbia border in Tabanovce and in Gevgelija for such reasons.

Some 100 mostly Iraqis and Syrians, nearly half of them children, remain stranded on the Serbian side of the border with Croatia which was refusing to take them in for various administrative reasons.

Among those caught up in the bureaucratic quagmire on the Greek border was Mohamed Darwish, a 23-year-old from Aleppo whose 40-day-old daughter Rital was severely sick. Even though he and his family managed to reach the front of the queue of people waiting at the gate to Macedonia, he feared he wouldn't make it across after all.

"I swear by God, I am waiting for this door to open. If it doesn't open soon, I'm thinking of going back to Syria. It would be better to go to Syria than to witness my daughter dying," said Darwish.

Rital was born in Syria, and the family fled when she was just 14 days old. But three days ago, she fell ill. Her parents don't know what's wrong with her because there was no translator with the doctors they took her to. They just know she's vomiting and has a fever, and has been put on a drip. The baby lay bundled with blankets in a portable crib, waiting all day at the border gate.

Darwish believes his biggest obstacle is the Macedonian border. "If I can get through that, the rest will be easier," he said.

But first, he has to fix his family's papers, which have all recorded dates of birth of January 1.

"I've been nearly a month on the road. I'm not prepared to lose my daughter. It would be better to die in Syria than for my daughter to die."