Wadi Salqa (Palestinian Territories) (AFP) - The Red Cross on Wednesday began distributing thousands of almond trees to growers in the Gaza Strip whose fields along the border with Israel were ravaged in succesive wars.

Mamadou Sow, head of the International Committee of the Red Cross in the coastal Palestinian territory, said the organisation would give "4,000 almond trees of different varieties to farmers along the border (whose lands were) particularly exposed in the wars."

Grower Marwan Abu Mharreb, one of the beneficiaries, described life in the border zone, hit by three conflicts with Israel since 2008 and run by Islamist militant movement Hamas.

"Every day we put our lives in danger by going to our land," says the 45-year-old who grows aubergines, courgettes and other vegetables in greenhouses, in addition to the plot where he is now planting the almond trees.

"(Israeli) military patrols pass near our fields, every day we hear shots from their training areas" on the other side of the border fence. 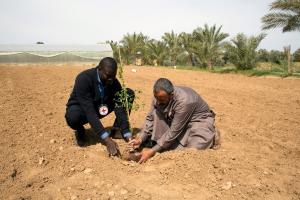 Mamadou Sow (L), head of the Gaza sub delegation of the International Committee of the Red Cross (IC …

As he spoke, shots rang out in the distance sending a flock of frightened storks into the sky.

Palestinian farmers on the border are nervous too.

"Who can say if an Israeli plane will not come and destroy everything anew," another grower said, referring to Israeli aerial spraying of defoliant along the border.

The Israeli military spokesman's office told AFP that the spraying was carried out to deny cover for the planting of roadside bombs and other "destructive purposes".

"The substance sprayed does not harm the environment," it added, before going on to say that it "will cause the surrounding vegetation to wilt and prevent its growth."

Sheep farmers along the border believe the aim is to kill foliage on which their flocks graze.

Sow said that the Red Cross had discussed the spraying with the Israeli military.

"We hope this will not happen again," he said.

The United Nations says that half of cultivable land in the Gaza Strip and 85 percent of fishery resources are inaccessible because they are adjacent to borders under Israeli blockade for the past 10 years.

In 1968, agriculture accounted for more than half of Palestinian gross domestic product, today it represents about 4-5 percent.