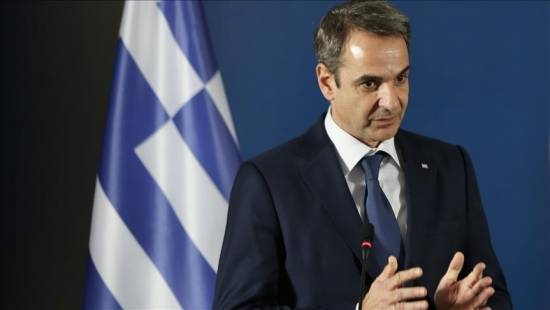 Turkey has played a significant role in managing the migration crisis, the Greek prime minister said on Thursday.

Speaking at a session held as part of the Athens Democracy Forum, Kyriakos Mitsotakis commented on matters pertaining to migration, fight against COVID-19 as well as the defense cooperation agreement signed with Paris.

Mitsotakis said his country would continue to defend its borders against irregular migration and would not allow the repeat of 2020 events.

Referring to over 4 million refugees hosted in Turkey, the premier said: "I've been very open in acknowledging the significant role that Turkey is playing in managing the migration crisis and that is why I urge Europe to work with Turkey constructively.”

“We have every interest in working with Turkey to contain illegal flow of migrants and to eradicate the smuggler networks that prey on vulnerable people...," he said.

"There has been a lack of European solidarity, the fact that we have not been able to agree on a common migration, asylum package due to the fact some countries consider this not to be the problem at all, placing all the burden on frontline countries. This is unfair," he said.

Arguing that the three new frigates to be bought from France would further boost the deterrent power of the Greek navy, he said: “I do not intend to enter into an arms race with Turkey and I'm always reaching out a hand of friendship to Turkey.”

The prime minister said the Greek navy considered the French option the best one, and his administration bought "the best ships at the best price" with a rapid delivery schedule.

On COVID-19, the prime minister said the Greek administration was trying to persuade people to get vaccinated.

According to the premier, the vaccination rate in Greece is "slightly below" the average that of the EU countries and the government would not impose mandatory vaccinations as it "would not be helpful."

However, he added, that the unvaccinated citizens would not have access to entertainment and sports events and that they will have to pay for their COVID-19 tests./agencies