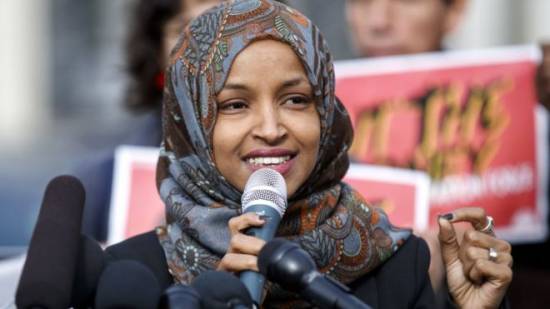 Ilhan Omar has leapt to the defence of a 21-year-old man who was imprisoned for oversleeping and missing the first day of his jury service.

Deandre Somerville, from West Palm Beach in Florida, was sentenced to 10 days in jail, 150 hours of community service and handed a $223 (£180) fine for sleeping through his alarm.

The young man, who cares for his elderly grandfather and works in after-school programmes for the West Palm Beach parks and recreation department, was also ordered to pen a “sincere” apology letter.

Ms Omar, a Democrat representative, argued the stringent sanctions imposed on Mr Somerville were symptomatic of a US criminal justice system devised to “criminalise people of colour”.

The Minnesota congresswoman, who is one of the first Muslim women to serve in the US Congress, tweeted: “This judge put a young black man with no prior arrests in the system for *checks notes* oversleeping. We must reform our criminal justice system, which is designed to criminalize people of colour.”

Mr Somerville, who has already served the jail time, was supposed to be on a jury for a negligence case linked to a car accident at the end of August but slept in around two hours longer than he was supposed to.

The young man, who lives with his grandparents and had no previous criminal record, said he did not get in touch with the court due to feeling anxious.

He added: “After going through that, my life will never be the same again.”

Civilian casualties, including Rohingya, surge in Myanmar, say UN experts
Thursday, 20 February 2020
The experts said that the reports reveal that over the past 10 days, nearly 1,100 people have been
Uighur Muslims: novel coronavirus could become increasingly virulent in detention camps
Thursday, 20 February 2020
A novel coronavirus is spreading rapidly in China, causing a disease called COVID-19. The latest
Muslim Girl Made Smart Shoes That Can Help Blind People See
Thursday, 20 February 2020
Nowadays, IT Engineers have also started to make their names for Pakistan in the International
REVEALED: China's Secret Reasons for Imprisoning Uyghurs
Wednesday, 19 February 2020
by Mary Margaret Olohan The Chinese government imprisoned Muslims for basic religious activity,
Leak from Xinjiang shows some Uyghurs are detained for family size
Wednesday, 19 February 2020
Urumqi, China (CNA).- A leaked document from a county in China's northwest details the personal
UN chief concerned about discrimination against Muslims in India
Wednesday, 19 February 2020
ISLAMABAD: United Nations Secretary General Antonio Guterres has said he is concerned that